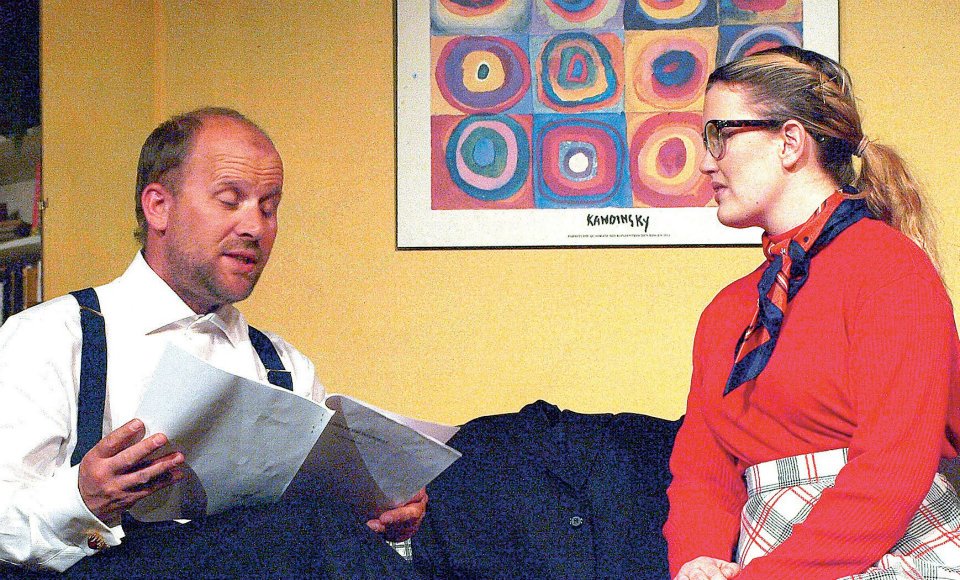 Article By Phil Gravelle
As published in The Erin Advocate
March 21, 2012

Romantic Comedy is perhaps the ideal title for a funny play about love – everyone knows what to expect, from that awkward first meeting, to the witty dialogue and those unexpected twists of fate.

The script is by Bernard Slade, a writer from St. Catharines who gave us The Partridge Family and The Flying Nun on TV, and Same Time, Next Year on stage and the big screen. The current production is by Century Theatre Guild in Hillsburgh, opening for a two-weekend run this Friday.

After dropping in to observe a rehearsal recently, I can report that there is some very funny material, both verbal and visual. I wouldn’t review something before it is ready for the public, and I cannot claim to be totally unbiased, since I have acted in small roles with this group. But still it is clear that the lead actors are skilled, confident and having a good time.

Titillating and heartwarming – it is a sure-fire combination for audiences when everything comes together well. That’s the challenge for Dale Jones, an experienced actor now directing his second show for Century Church. The first was last year’s Farndale Murder Mystery.

“To direct a play is to take words on a page and make them come to life,” said Jones, after watching his cast run through a scene without scripts in hand, fine tuning expressions, stage positions and sound cues.

“It’s got all the human emotions,” he said. “What is marriage? That’s what he (Slade) is talking about, and it’s really well done. Everyone has had mucked up relationships or knows someone who has, so they can relate.”

Jones has never seen the play done elsewhere; he just read a series of scripts and picked his favourite.

“It’s the one you can’t put down,” said Frank Rempel, who plays Jason, a playwright who, on the day of his marriage to Alison, meets and falls in love with the fascinating Phoebe. He happens to be naked at the time, since he was expecting a massage therapist, not an admirer who would become his playwriting partner, with each married to someone else. The roles of Jason and Phoebe were premiered on Broadway in 1979 by Anthony Perkins and Mia Farrow.

The story spans 14 years of failure and success in both writing and relationships, as Phoebe, played by Stephanie Baird, goes off to Paris with her new husband Leo, played by Martyn Worsnop.

Jennifer Bartrum is Jason’s agent Blanche, Lindsey Papp is Alison and Sharon Ching is Kate, who plays a key role in the breakup of Jason’s marriage. The Stage Manager for the production is Charlotte Sue.